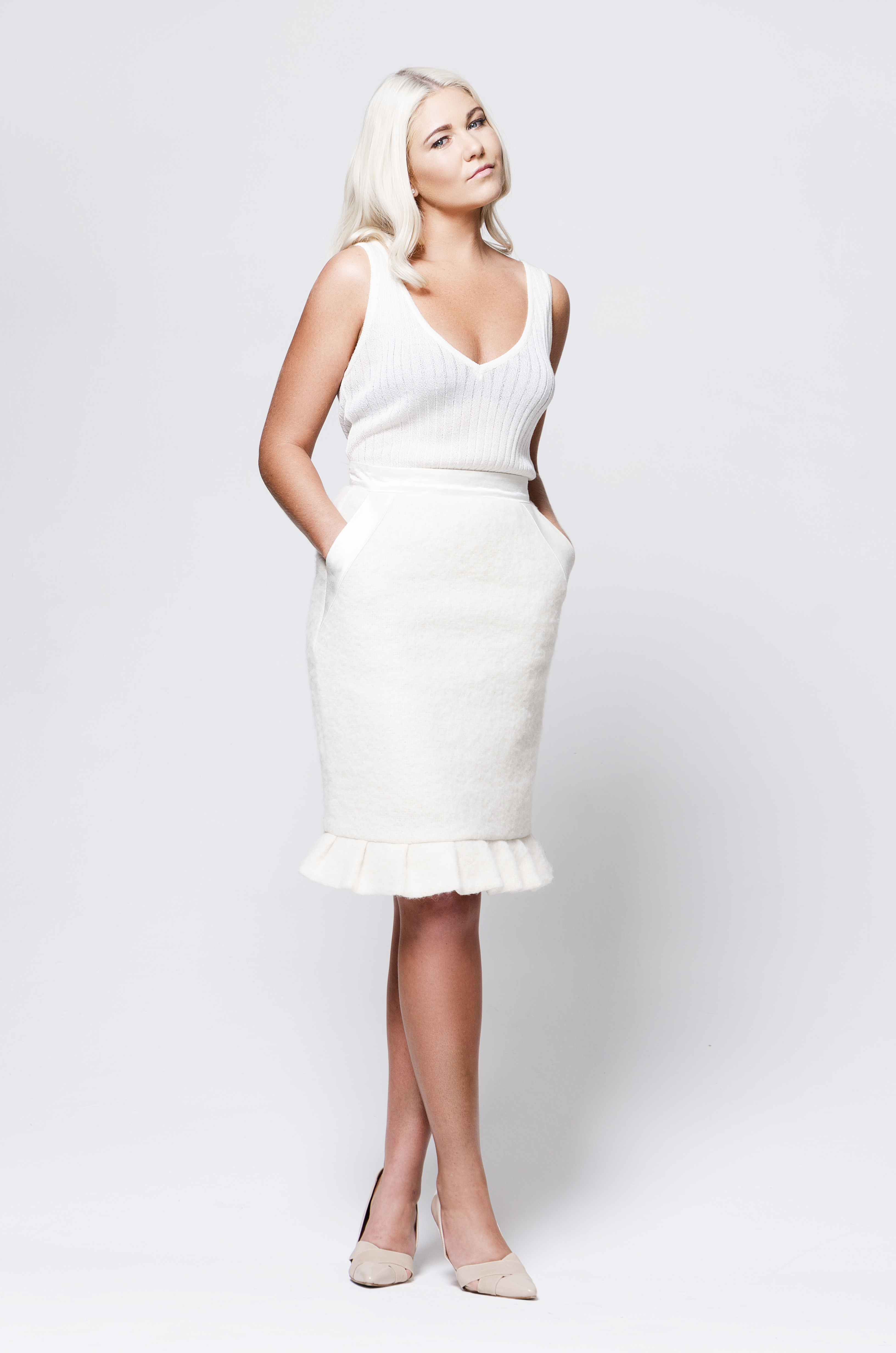 Tamara, who are you?
Ah fuck.

Wow, that made me laugh, okay take your time.
I am a designer, cat obsessed, a people person, a creative, a sunshine girl, I love sunshine. Must I just throw out things?

Yes, go for it.
I am someone who wears their heart on their sleeve.

Do you remember the exact moment you knew you wanted to be a designer?
As long as I can remember I have always wanted to be in the creative field. From when I was little I have drawn every day. I thought I was going to be an artist, like in Mary Poppins, on the side street. My dad was like, oh gosh, thinking I would be relying on him for the rest of his life. In high school, it was a toss-up between graphic designer, fine art and architecture. At 16, I was doing art higher grade, we were doing a project where we could do anything that interested us. I decided to make a dress out of playing cards. It was horribly made, all stuck together but that was the first time that I started being interested in clothing and fashion design and started reading British Vogue, from there it spiralled. That was the beginning of my love affair with fashion.

Have you still got the dress?
It is sitting somewhere in P.E with its stables and glue…

Jumping back to 2011 you won the Durban July designers award?
So that was in my second year of studying fashion design. It was such a last minute entry. I wasn’t going to enter and on the day the entries closed I told my college I wouldn’t be entering. They told me I was. So I had to do a very last minute entry, storyboard, I got in and ended up winning. I didn’t realize I had won, so when they announced my name for the young designer’s award and pushed me forward I thought they were announcing third place… There are photos of me looking very bewildered and lost. It was amazing, it was out of my comfort zone, very avant-garde, but I followed a brief and gave them what they wanted. What was amazing besides for my prizes and some money and money for my college, I got to visit Graduate Fashion Week in London, the following year, which was incredible. This was during my third year, it was such an eye-opener to see the level of work in Britain and to figure out where I stood and where I fitted in on that level. To see, oh actually, I can compete here or actually I need to up this part of my process. It was amazing.

2014 the Elle Rising Star Competition… was that before your internship with Vivienne Westwood?
No, I interned at Vivienne Westwood between second and third year. So 2012 and 2013. I interned at Vivienne Westwood Design Studio in London. I did that over my summer holiday for two months…I worked at London Fashion Week, I worked in one of the diffusion lines, the Red Label. It was definitely an eye-opener to the industry. I came back a bit daunted about the industry, I won’t lie. I wasn’t sure if I actually wanted to be a designer. But about a month later I was paging through a magazine and I got butterflies looking at a campaign and I knew that this is all I wanted to do. Yeah, so it was an amazing opportunity I learned a lot.

How did the internship fall in your lap?
I e-mailed through my portfolio, they weren’t too happy with me only being there for 2 months. They usually do longer internships. Most students who do an internship take off a whole year and intern from 4-6 months with each designer. I was supposed to go to the gold label, which is the more high-end label, under Vivienne’s care. But I had already missed some of college. I am still in contact with a few of the designers and the some of the interns I met and made friends with there.

First day on the job what were you thinking?
I was so intimidated, I felt very out of place. We went straight into a business meeting with fabric suppliers, I realized straight away that it is all about money and profit and that even these massive design houses have to report to HR and validate every penny they spend and why they want to spend it. That was an eye-opener.

What experience do you bring back to South Africa having had this opportunity and gathered this knowledge?
The design process that they go through with spec sheets I found quite cool, it was new to me because it was before my third year. I also wasn’t very advanced with my technical drawings, flats and technical illustrations so I was thrown in the deep end because. I learned from an incredible junior designer there. Each design house has a specific style. The simple processes which they implement into their businesses… also their research process, it is incredible how they have an archive with pieces right from the beginning when Vivienne Westwood started her brand.  The head of the Red Label that I was working for, he heads up the archive. There are just rows and rows of samples from each collection. It is all clearly labelled. The style could be rehashed or just elements from past styles, keeping in-line with the brand image. She is great like that. Her brand aesthetic is so strong. Her design aesthetic is very different to mine; it was so great to have that experience with such an accomplished British designer.

Did you meet her, what is she is like?
She is actually very quiet, so you feel like you don’t really want to bother her. I didn’t recognize her at first – she had a beanie and was all wrapped up because it was freezing cold, it was January. So I didn’t see her bright orange hair. In her campaigns, she comes across as crazy but she is different in real life – I guess in a work environment. She is always talking about climate change and how to help the world, which is inspiring. She rides her bicycle to work often.

So her brand is interested in sustainability?
Look on her website she does a lot of campaigning to save the rainforest and educate about climate change. I am not sure how far her sustainability goes with fabrics and all that stuff but definitely look that up. So you feel like you need to say something very important to bother her. She oversees the whole of the Gold Label. She is still independently owned, they are not bought out by a company. She owns half the business and a partner the other half. He is the one that tried to make it more commercial and brought in the Anglomania line and Red Label and the men’s wear range. Hers is still the very creative, high-end line. He also brought in the accessories and the perfume, that’s all that makes the brand sustainable.

Did she say anything to you that stuck with you or did you receive any good advise from someone that side that has stuck?
I wasn’t working with her because I decided that I couldn’t stay longer to work on the Gold Label…

From someone else, you worked with?
I got some great advice from the junior designer for the Red Label. Marcelo he is an Italian guy. He told me to be true to myself. He harped on that, and to stop doubting. Also that I don’t have to validate every decision I make. I have gotten the same advice from others like Jackie burger who told me to just really believe in what I am doing.

Jumping back to 2014 to Elle’s Rising Star Competition, you had entered a few times before you won, what kept you motivated to keep going and keep entering until you won?
I entered in 2012 in my third year, I entered my graduate collection, I was one of the top 8 finalists. The feedback I got at that point is that it wasn’t about my designs it was about me – building my confidence to believe in my brand and myself. It was amazing, that first time really helped me figure out my brand, who I was as a designer and who I was as a person. I really did a lot of work around that the following year. It was amazing that they acknowledged that in 2013, the same judges were around. They acknowledged how much I had grown as a person and as a designer over that year. That was really nice to see. In my 4th year while doing my honours I decided that because I was launching my brand it would be a great time to get exposure. The amount of exposure I had gotten in the 3rd year already was incredible but I wasn’t ready to start my brand then. I went in to really push myself and get the exposure that I could from the platform. It was tough because I was busy being judged while busy with my thesis. I am very lucky, it was an incredible experience.

What motivates you?
To continuously learn and do better in everything I do. I love learning new things and I hate the feeling of not knowing something that I am interested in. So I want to research and know more and know how to do something and how something works, not just in design, but with life in general. I love being able to create a product – from a sketch and watching it come to life. That’s an incredible feeling. I really get excited when I find beautiful fabrics. Design as a whole excites me; interior design, architecture, and fashion…

Looking back to when you returned from London feeling a touch disheartened about the South African fashion industry to today?
I think it was a great thing, when we are studying we are disillusioned with the industry and what it really involves. At the moment I am so excited about the industry in South Africa, I think it is really the time for emerging young designers. I know some incredible young designers who have been showcasing and getting their brands up and running. The best advice I have been given is to take it slow and really establish your brand, figure out where you want to take it and what your vision is. Also, not to get caught up in the hype. After winning such a big competition everyone wants to buy, to be stocking you. You really can just get caught up and you could fizzle out real quick. So as much as I might have pissed off some people for not getting started a bit sooner, I am happy with where I am at now.

Photography by Marnus Meyer
Makeup and Hair by Tremayne West