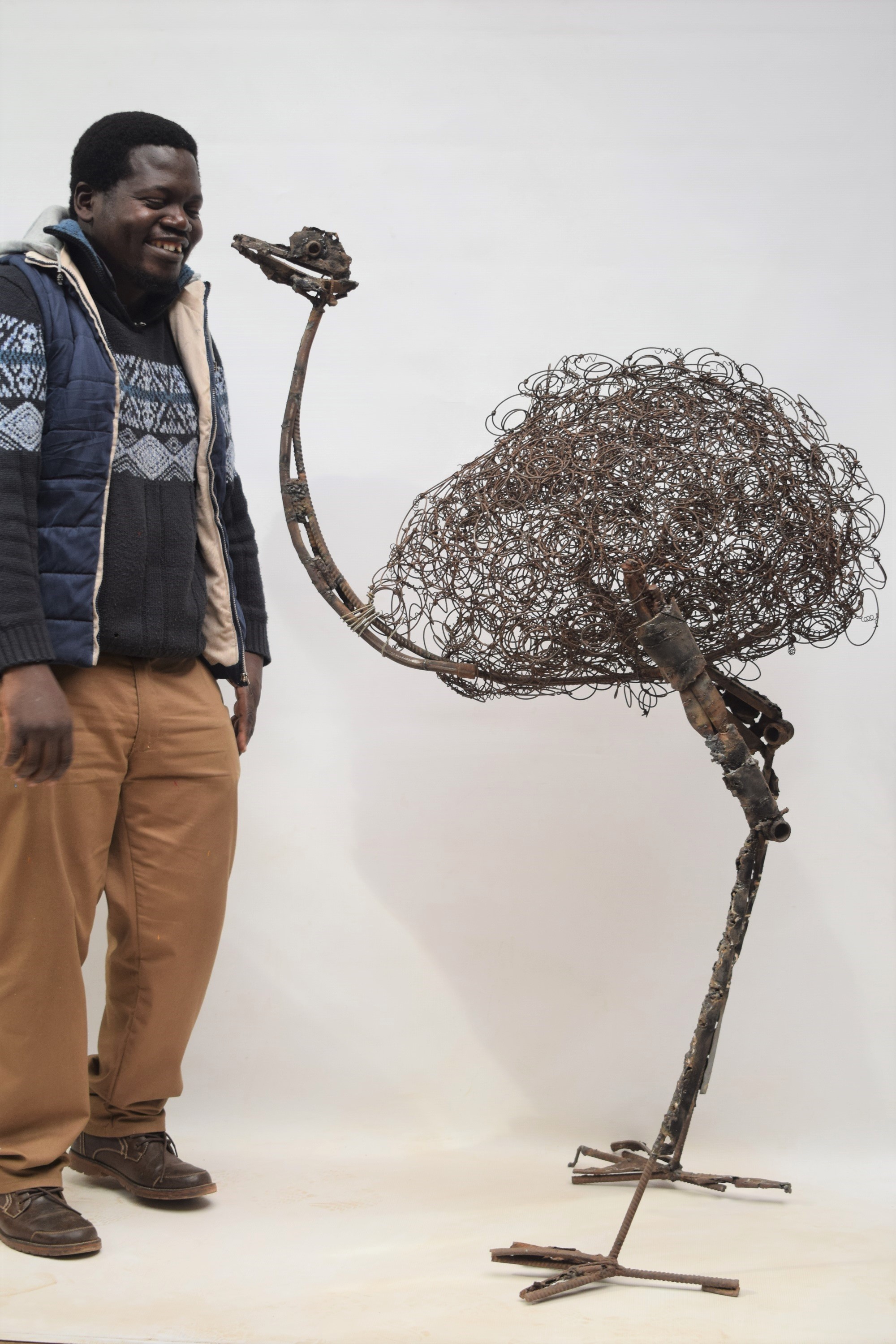 Mwamawasa, where are you from?
I am from Zambia from a place called the Eastern Province.

Tell us about yourself and your background, please?
Well, I have had an interest in art from a very early age but did not know or understand it then. I was looking at the old master’s works in a slideshow that was being held at a museum next to where we lived back home. I guess what fascinated me is how the colours somehow told different stories in paintings all within one picture. I pursued art in high school and passed with distinctions. I then studied further, after which I ended up waiting tables in a big hotel to sustain myself as art jobs were scarce.

Let’s start with how you came to be living in South Africa?
While at the hotel, I later worked as a front office supervisor, a guest from South Africa told me about the many opportunities artists have In South Africa. I started saving to come to SA, the USA of Africa. I made it here and for four months had to live in a 2m x 1m shack in a place called Diepsloot. I literary starved for four months and had to keep sane by visiting the local shebeen and doing sketches. The one makeshift toilet that stood in the centre of the shacks was always blocked. I kept my strong will and walked a lot, one day I walked to Dienfern and there a lady gave me some apples and R20. I decided to jump onto a taxi and see where it would take me, I ended up in Rosebank. I found an art gallery and the owner was kind enough to feed me with soup, buy one painting from me and pay for my accommodation in a nearby studio cottage in Parktown North.

Very kind. You use your art to communicate your thinking about the world around you?
That is true, art is the one tool I can use to express my emotions. The music I listen to also helps to inspire whatever art I create.

That question takes us to your new piece of work, what is it called?
This particular piece is called Abantu Bakhathele (A People Gatvol).

Tell us about it?
It depicts people who come out to express their anger and dissatisfaction with the current government leadership and a renegade capitalist family that has captured the state against the will of the masses.

What motivated it?
It was motivated by the negative ripple effect that a few people in power can cause which can lead to the sufferation of the nation as a whole.

Were you inspired by The Spear?
Not really, I never knew about The Spear until when I put the artwork in the gallery and people started giving reference to it.

You aren’t the first artist to express dissatisfaction with the government through art, what reaction do you hope for and what do you wish to achieve with this piece?
I hope that the world can see the injustice that has been done by the greedy few, through the eyes of my artworks and bring more exposure to this. I hope that this one single piece can make a lot of noise which in the end will lead to positive change.

The future?
Well, the future is already almost here, it comes in the form of a series of satirical comic books that describe the everyday happenings around the politics of this country or just the behaviour of politicians around this country, negative and positive. It may be a popular dance by Mr President, or a powerful politician beating a woman helpless somewhere in Johannesburg. Whatever it is it will be captured and published in these comic books even though some characters will have nicknames. I stop here to salute the fact that the pen is mightier than the sword.

Anything to add?
You asked about my sculptures, I started making metal pieces in 2000 when my daughter was born. I could not always afford canvas and paint. Recycling metal and whatever scrap I could find seemed the only logical way to go. The particular piece in my picture was created in June when I came across an old mattress in downtown Jozi. I got a lot of joy when I was jumping on it and trying to manipulate it to work for me. In the end, it evolved into an ostrich. I have also built a rhino and other things from scrap garden tools and car parts.