Tell me a bit about yourselves and how you got involved in music?
Jess – I am studying music at UCT. I play in a few bands, that is my life. I have been playing since I was a child, I started playing recorder and piano and have added on from there. It is just something that I was meant to do.

You play sax?
Jess – Yes, sax in all bands except I play the accordion in one, hopefully, I will bring it in somewhere else…

Jess – I am still learning how to play the accordion.

Chris – I got into music when I was a lighty, banging on pots and pans. Many a chopstick and wooden spoons were broken. I went travelling around the world on a musical journey.

So you played around the world…
Chris – I started in Europe and did a bit of busking, a very difficult industry to get into… its underground, you have guys who have been there for years. I managed to hook up with twins from Ukraine, they did hoops, bubbles and things like that. I jammed with them, they were travelling with a guitarist at the time. We took it through Europe. We then went to South East Asia and just drummed on beaches, cool stuff like that. What I find the most awesome thing about the drum and travelling with it, is that it is a key to other cultures. There are no inhibitions, people are drawn to it. There are many opportunities that would have passed me by, if not for my drum. I am very grateful.

Tefo – I am a drummer/ vocalist / piano. I started playing music when I was in primary school. I actually started with arts and acting but eventually, I saw that my passion is music. I started with piano then a bit of voice but I realized drumming was fun. A stress reliever. It helps with everything in life, it is so good for you.

Tefo – Spiritual spiritual. So I am in a few bands, I play the drums in most of them.

Jeronimo – I am the Columbian connection of Los Tacos. I got into music, well more rapping. Between 15 and 18 I started rapping, writing and expressing myself. Through the years I have met other artists and rappers and have got involved, although I never took it very seriously. Eventually, when I got to South Africa, I started to get more involved in the music. I met Los Tacos three years ago, we just started out having fun. I started to do singing which I hadn’t done before and now we are doing different styles. Los Tacos has opened me up to that kind of expression and helped me to change myself. I am really happy.

How has Los Tacos helped you to change yourself?
Jeronimo – When I first started to play with Los Tacos I wasn’t singing the music I was used to. I had to let go of my ego and sort of empty my cup and learn things I didn’t really want to do at the beginning. I realized I needed to do it to take us through this journey. I could later bring in my own style, be more open and not just get stuck in one way of seeing things.

New guy? Welcome, would you like to say anything?

I am going to put that in.
Glenn– I play bass. I got into music when I was seventeen because I was desperate to be cool, it didn’t work but I found it was a cool thing to do. Music was a vibe and all of my immediate friends were just starting out in music. Jessy was just starting out on guitar. I then met Shaun who was also playing the guitar. Music just became a thing we did, we could hang out and play, it was the central vein of our friendship. It is a big reason why we are all still friends today. We are a tight unit of friends that go back like fourteen years now. It is beautiful that I find myself in a band with two of my best friends. It is a testament as to why music is a profound thing to have in one’s life. Why Los Tacos… I met a cool guy named Christiaan from Columbia, I had spent a year living in Argentina. I had learned some Spanish and was quite keen to keep it up when I got back. So here was this guy who was a musician, someone I could speak Spanish to. He introduced me to this restaurant called St Gulian, which is a Mexican restaurant in Green Point, owned by a Mexican family, all the waiters and waitresses are South American. Everyone speaks Spanish there. He told me about this idea he had to start a Latino band. He knew this guy who could rap and who he could probably teach to sing. I instantly knew Shaun and Jessy would be keen to do this. That for me was the pull, wow Latino project awesome. And…

Shaun – Here we are…

Glenn– It took a long time for it to become something, I mean we were playing in a garage. It was fun and casual. We weren’t taking it seriously then, now I see this as a future in my life. I see this as something that is always going to be very deeply a part of me. To the point where I am… I have never had a tattoo, I have always said I would be keen to get one, but it has to be of the perfect thing, it is going to be something to do with Los Tacos, that I know already. Yeah, that is my journey as a musician and Los Tacos. Over and out.

Shaun– Hi, I play the guitar for Los Tacos. My musical journey sort of started in grade 6 when I was body-boarding, well I had this body-board but I wasn’t really body-boarding. I lived in this complex, it is hard to explain it was pretty much on top of this valley, we had all of our own shops, our own everything. No-one ever really needed to leave.

Shaun– Yes, this was in Durban.

Glenn– Sounds like a fairy-tale, this valley…hard to leave…

Shaun – I know this it’s crazy, this is where I lived in Durban. So this guy asked if I wanted to swap my body-board for his guitar. I got the guitar and started learning. There was a whole bunch of kids who played the guitar, we used to walk around like a gang with our guitars strung backwards over us. Jessy and I went on our gap years together, he is the lead guitarist. We spent a year and a half living in the same house together playing the guitar. We used to come home every day and play.

Our dream was to come back and start a band, next thing Los Tacos started. I have recently decided that this is what I do. Do you know what I mean? We have this social sort of mantra, this weird insecurity about being musicians, that runs through everyone. There is something about saying that you are a musician, what about your future…how could you do music? I come from a background where there would be a concern for things like that. I aspire to rewrite the image of what a musician is. I don’t aspire to be a rock star ripping TV’s off walls and the rest of that story. I want to be a mobile person that can work online and move around the world, touring with a group of my closest friends inspiring and sharing positively. How could you be more privileged than that?

You guys have been playing since 2012? How did the band come together?
Shaun – The four of us that were originally connected was me, Jeronimo, Glenn and Christiaan. I had known Christiaan and Glenn had known him. There was a conversation that kick-started everything. Christiaan was saying he loves being in Cape Town but he missed playing music. My entire group of friends are all musicians… When Glenn approached me and approached Jessy, we decided it sounded like the craziest thing ever, a bunch of Jewish kids playing Latino music in Cape Town.

Glenn – A funny antidote around Christiaan missing music, he was going to an English school where another friend of ours named Shaun was a teacher. Shaun and Jessy used to throw these house parties. It was always a bring your meat and your instruments, come to hang out and play music. That is where we first met, our first conversation was actually through our instruments.

Who writes your music?
All – We all do.

What is the process?
Jeronimo – When it’s a big band there are different levels of writing and different layers to it. So the process starts with someone bringing a beat around and we start jamming, one joins in and another joins in and we see if it is catchy or not and if we can build on it more and then I start freestyling. It is a more natural process.

Jessy – Yeah, somebody will start with a beat and as Jeronimo mentioned we all slowly join in. You get different fragments and after you have got that bit we spend the next four or five rehearsals trying to put all the fragments together into something that flows. Sand it down, varnish and polish it and make it all nice.

Let’s talk about the support you receive from South African music lovers?
Shaun – The industry itself is pretty interesting, there is a lot of stuff going on that complicates things and affects everyone. So far so good. People have responded positively to us, we seem to be doing okay. I think the root of that is whenever we play we ask ourselves how we can do things differently. We try our hardest to push boundaries and make it more of an experience for people. I think the narrative that everyone is used to is exhausted, we are experiencing that, coupled with the fact that electronic music is much easier to promote and much easier to book, so it is where promoters energy is going. To combat that we just have to do better shows and that is what we are trying to do. We are hearing the call for more interesting live shows and we are responding to that. The secret is to never take more than you give.

One of your favourite places to perform?
All – Stellenbosch!

Chris – An organization called Sustainable Brothers and Sisters were doing a fundraiser event at this beautiful house which they are converting into a sustainable place of education. There was this massive oak tree in the middle of the dance floor, chickens and dogs running around. It was magical.

Sum up Los Tacos in a line or two?

The last one, what is coming, let’s talk the future?
Glenn – Well in my mind at least I see a vision pipeline so we have now released our EP, we want to produce new music, collaborate with other cool bands like The Rudimentals we played with at our EP launch. They are going to remix one of our songs and we are going to perform that live together. We also want to do a documentary. I would love to do one on the interesting life of  Jeronimo, he has a crazy cool story. Another album and a tour to South America. Each thing builds upon the previous is why in that order, everything we have now is built upon our previous three years of work. Something as big as a tour to South America cant come without pushing hard, be it through a promoter that invites us or through crowdfunding. 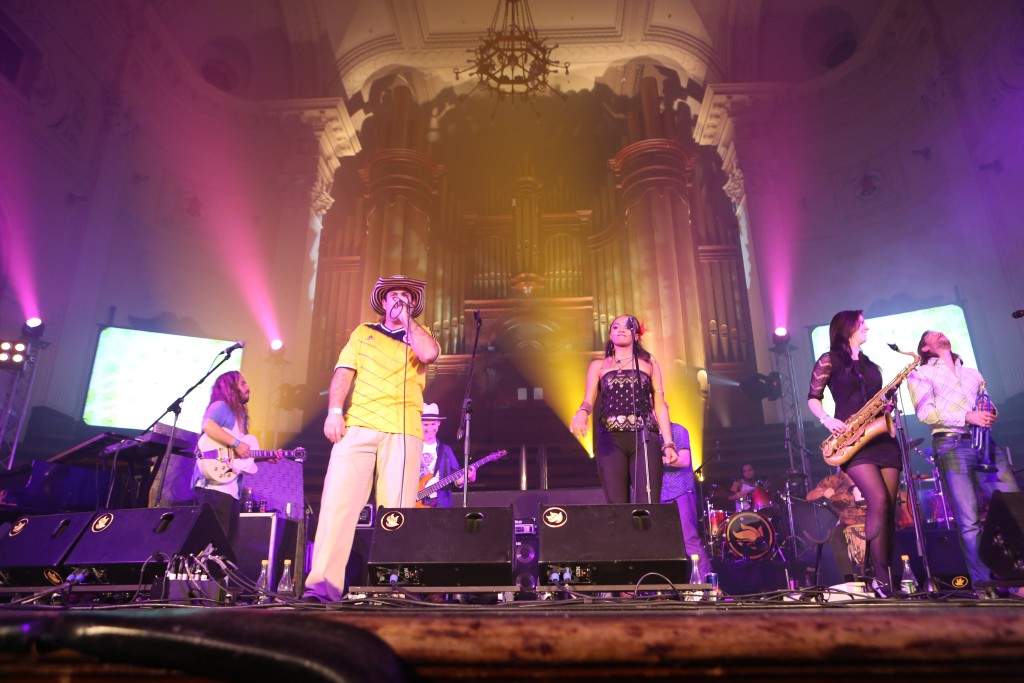