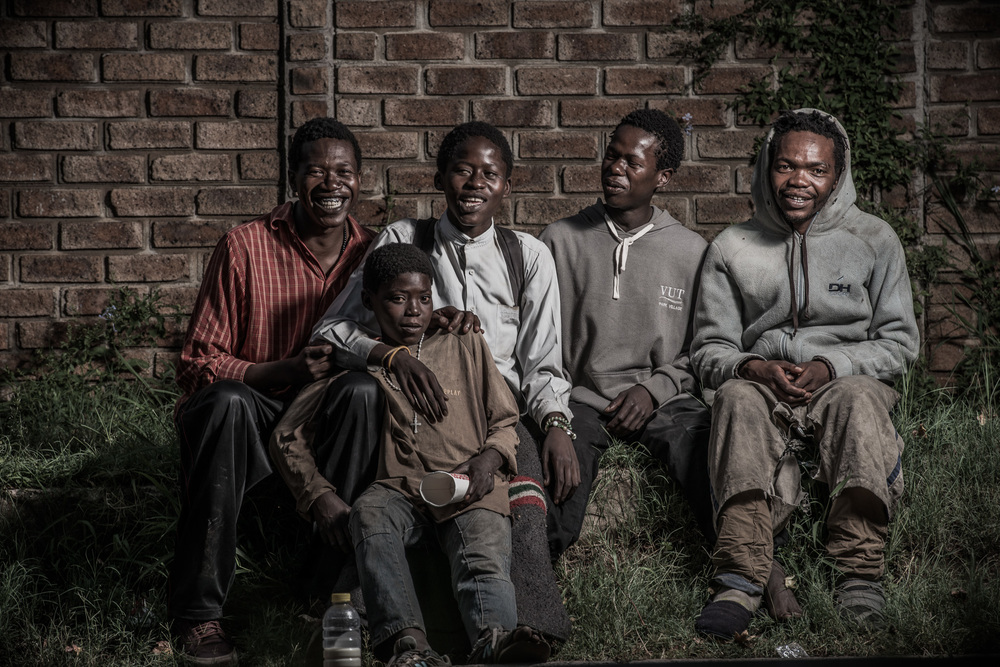 At our core, we are all human. As long as our hearts beat and there is a move of blood flowing through us we yearn for love, kindness, and a place to belong; this is something that is easy to forget as is the fact that we are all a little bruised, a bit battered and, we all have our own stories. If you’ve ever driven through Oaklands and past the Great Park Synagogue on Glenhove Road, then you have probably seen or at least driven past Bonginkosi, Thato, Bethuel or Abel.

The four along with a group of eleven other men, of all ages, man the Oaklands district in the hope of receiving any kind of charity; whether it be clothing, food or some spare change, everything is something. For these men begging is an occupation, a means of survival and has been an instigator of many experiences. At face value, you might just see another black homeless man but before that, they are people who have dreams that have fallen apart, they have been disappointed in their time and there are activities and music that they enjoy, just like you or I. Mamello chatting with the boys

I cannot deny the unease that gripped me when we first approached Abel, who happily introduced us to everyone else. My discomfort was soon displaced by their hospitality. We were on their turf and they were hosting us. Just as one would offer a guest a glass of water Abel offered me his cardboard sign and a jersey to sit on. I realised that I had allowed myself to slide into the pattern of othering them because they are homeless when the only real difference between us is privilege. They are not monsters nor were they criminals eager to snatch our belongings. They were four young men happy to receive kindness and inundate us with it. Abel, who happily hosted us and got his mates together to come and chat with us. Bongi having a laugh

The more we spoke the more frequent the laughter and the more personal the conversation, which often steered off topic, it felt like sitting under an old peach tree with my brothers at home. It felt like prattling with old friends. Even when the conversation was heavy with dejection each of them portrayed an unbelievable light-heartedness and chuckled sincerely.

Bonginkosi, whose eyes glistened with warmth, was driven from the Free State by the desperation that comes with unemployment. Armed with his matric certificate he had a plan, which did not manifest or involve criminalising himself. To cash in on the promise of prosperity which people associate with Joburg but sadly with no friends, family, or money for accommodation following the death of each day he was forced to find resolve in retiring on pavements. I asked him whether he had considered going home and the question stung my tongue as his eyes grew desolate and his brow creased. He answered, “Go boima, life ha e simple my sista”. And, unlike his friends, Bonginkosi’s response told me that the topic of his family was not up for discussion. It was not a textbook answer but I knew that that story carried a darkness as morbid as hell. Thato often kept his head low during the chat

Thato, Bethuel and Abel all shouldered stories of rejection from, their parents, the people we like to believe are obliged to love us unconditionally. Tears welled up in Thato’s eyes as he told me about the bad choices he had made and his mother, who he had only met when he was seven, falsely accusing him of wanting to rape her. Of all of them he had the softest voice and took the longest time to warm up to us, yet his soreness hit me, like a blow to the stomach, as I watched him shield himself from my gaze by tucking his head in between his legs. There was sniffing and then a low voice emerged asking me to imagine why he would want to rape the only parent he ever knew. We spoke about their dreams and religion. Even after being homeless for eleven years Bethuel, whose rejection had not tainted his gargantuan smile, assured me, with an unshaken confidence that he was going to get off the streets someday. I wanted to bottle his confidence and pocket his smile; the two were equally as contagious and so much more striking after he admitted that watching the years slip by is discouraging but he still had a peak of hope. He too had tried to go home a few times but his parents had parcelled him around so much when he was younger that neither of them made him feel loved; and, what is a home without love at its foundation? Bethuel – hasn’t given up hope of finding a job and getting himself off the streets, none of the guys have given up.

I asked them about their opium or what stopped them from losing their minds to which they responded that no sober minded person can gaily stretch into a bin for dinner, digest being ostracised because they are homeless or collect scraps to make a bed under a bridge. You need something to sedate you. Between them, their drugs of choice are marijuana, nicotine, and alcohol. They told me that they are a family and the support that they draw from each other pulls them from sadness every day.

Deep in conversation about what they were going to eat for supper, which they indulge in as a collective every evening, they walked us up the street to the car and introduced us to the youngest member of their family, who they call “le gundwane”(little mouse) and playfully teased him. Nkosanathi or le gundwane (little mouse) – the guys interacted with him like a little brother.

They were at home, their make-do home, and those are the things that we do when we are at home with the people we love. At that moment, as if it had not been evident to me the entire hour we sat together, it struck me again and I knew that irrespective of circumstance or class, we all have our own story and at our core, we are all human. As long as our hearts beat and there is a move of blood flowing through us we yearn for love, kindness, and a place to belong. The guys insisted I do another group shot which included Nkosanathi, or le gundwane (little mouse).

Edit: Note from Alon – 5 April 2016
Yesterday I took the guys some prints of the photos in this article so that they would always have a memoir of this time in their lives. We really take it for granted that we can easily take and record moments in our lives.

The amazing news is that Bethuel has since found himself a job as a gardener, the guys were all totally stoked to tell me, and Thatho no longer had to wear those bandages on his feet as the corns and sores underneath have cleared up.

Something we may not realise is that the guys often get sores under their feet from standing on the hot tar all day, so maybe offering some foot cream or Bactroban next time we feel like giving charity would be a really thoughtful gesture.

A lot of people are reluctant to give money to beggars, so here is a list of alternative items that can make a significant difference to their lives, but are pretty easy to give: