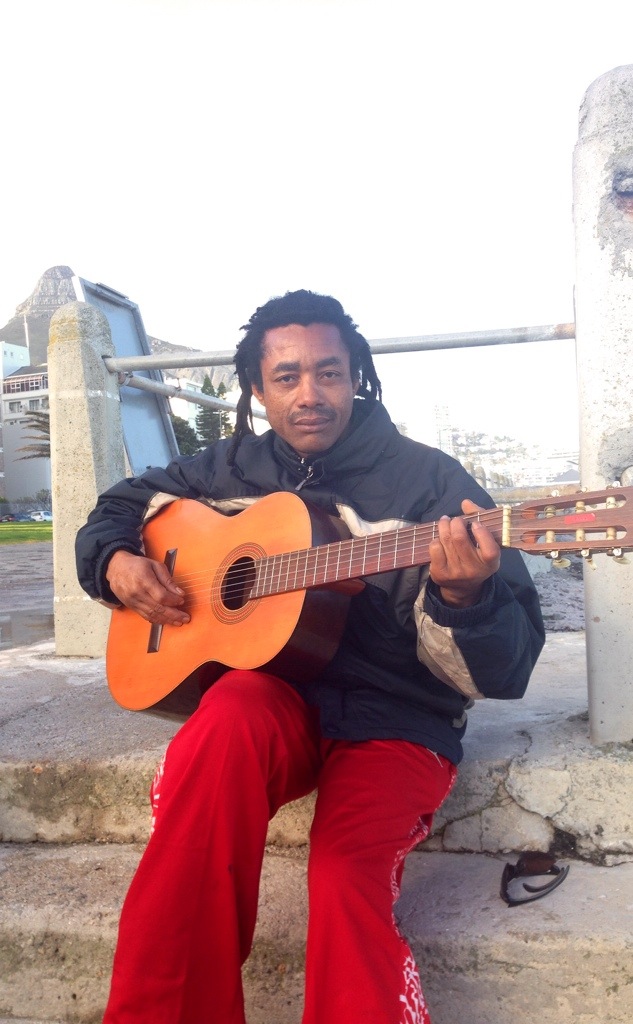 What brings you to Cape Town?
I was passing by. My intention was to go to the US. I am a chief. My friends said I could come here to improve as a chief. I changed my mind about the US, financially going to the US is not a good idea now.

You are carrying a guitar…
When I was a kid I wanted to play the guitar. When somebody gave it to me I couldn’t even tune it we had to get someone to tune it for me.

Who gave it to you?
Tony and Carrie-Anne, they are South African friends. They found a teacher for me, you know I would just play as a kid, they found someone who knows music. Eventually, after two months the teacher told me he couldn’t teach me anything else I was above him.

I then found Mark who is now my producer and teacher. He told me to find a place to play live as it would be easier to record. But timing and confidence were hard. My friend Maureen found me a place where I started to perform. I started playing alone last week, two guys have since joined, hopefully, we are going to play together.

Do you write your own music?
Yes. Every song means something. The one song is about a lady who disappointed me. I lost my job and couldn’t send money home and so she married someone else.

Sad.
That’s life. Another song is about a lady who was using drugs, she actually helped me. She advised me. That was a help for me. I will take any advise. I used to drink a lot and smoke a lot of marihuana, she helped me to stop.

Did she stop?
No, we intended to stop altogether. Rehab is costy. I wanted to marry her. It couldn’t work.

Let people know they are here for a reason. Everyone has a reason to be here.

Five years from now, where are you and what are you doing?
I hope I am going to be a musician. I want to give people a message. I don’t know for now where I will be. Anywhere I can perform and leave.

I am like a bat. I don’t have a home yet. I have lived in many places.