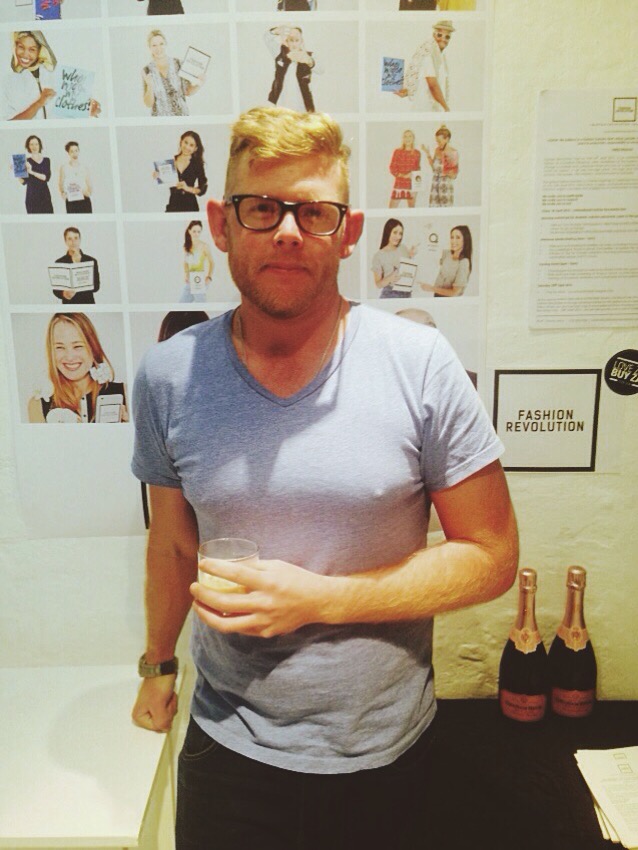 I met Ernst at the Fashion Revolution Event – Who Made My Clothes. He is the photographer behind the work.

Okay, let us go back in time. First time you picked up a camera?
I was in Venice, I went with my parents and discovered how beautiful it is. I had a camera, it was the first time I had ever gotten up at 5 in the morning for sunrise to take photos. My mother had a much better camera, after we printed them all she said that my pictures were so much better than hers. I left it alone for many years after that and suddenly I started picking up a camera again. That love of that city…the architecture…sparked something in me. I haven’t looked back since.

How did you get involved in fashion photography?
Fashion photography essentially came from when I was having a life crisis and I went to Kenya. I was sitting on the beach, relaxing. A photographer came up to me and asked me if I could help him out. I didn’t really know what to do but he told me not to worry. There was a beautiful Brazilian model in a bikini in the water. I looked over at him and asked him if people really get paid to do this. When I got back to Cape Town, I gave him a call. I started working for him, assisting him, helping out on production for a number of years. With my sister as a fashion designer I was constantly pulled back into fashion. I shot for many years within the company I was working for, doing lots of castings and doing my own stuff. I also went into film over time and last year I won this great award at the Bokeh Fashion Film Festival and that gave me the confidence to step out knowing that people do like my work. It changed my whole life, I decided to pursue a career in both cinematography and also in photography. It has been an incredible journey since then.

Let us talk a little bit more about the Mercedes Benz award that you were awarded at Bokeh?
That was an incredible night, I had no idea that anything like that was going to happen. I went for the free drinks and the beautiful girls. I walked outside and back in and all the screens were playing my film. It was really surreal. I looked at the stage and they announced my name and said I had just won the Mercedes Benz prize and asked me to go forward. I went blood red, I accepted the award with the most humility I have ever felt because I have never been so honored and never been so proud at the same time.

How did you come to be involved with Fashion Revolution?
I can almost say I have two sisters. Alice is my biological sister and Olive has become my sister over the many years that they have worked together. I was introduced to South African fashion by them and that is also how they got me into this whole thing (fashion rev). They sat me down and told me about Fashion Revolution and asked me if I would be interested to be involved. I couldn’t say no. I heard about what Fashion Revolution is doing; it is all about being ethical, sustainable and buying local. Also focusing on the future, changing consumer habits and also hoping to change corporate habits to really fit into a more eco-friendly and more sustainable way of doing business. After the big factories collapsed in numerous places in South East Asia and Bangladesh specifically, it pulled a heart string, that I decided I will join, we will also have some fun and shoot something nice. I have gotten to meet all the wonderful people that are part of this collaboration and global initiative to change the world just one step at a time. More importantly, changing the world by starting with themselves and showing other people that they are committed to doing this. Also allowing the viewers, the buyers and also the corporates to notice that this is possible. It just seems logical to really give one hundred percent and create something of beauty and of fun for this Fashion Revolution 2015.

Last one? Future?
I think the future is so undeniably positive, we live in a point of human existence that we have never been before. Our choices actually matter. With the internet coming around it actually means that consumers matter and we can sway massive corporations with the decisions we make. We as a young generation that are connected through social media actually have a real ability to activate change. We dont need to be fed products and lifestyles anymore we get to decide. That is where the Fashion Revolution has really been exciting, it is giving people alternatives. These alternatives exist in your back garden- they are local, they are sustainable and they are ethical. That is the future that lies before all of us.