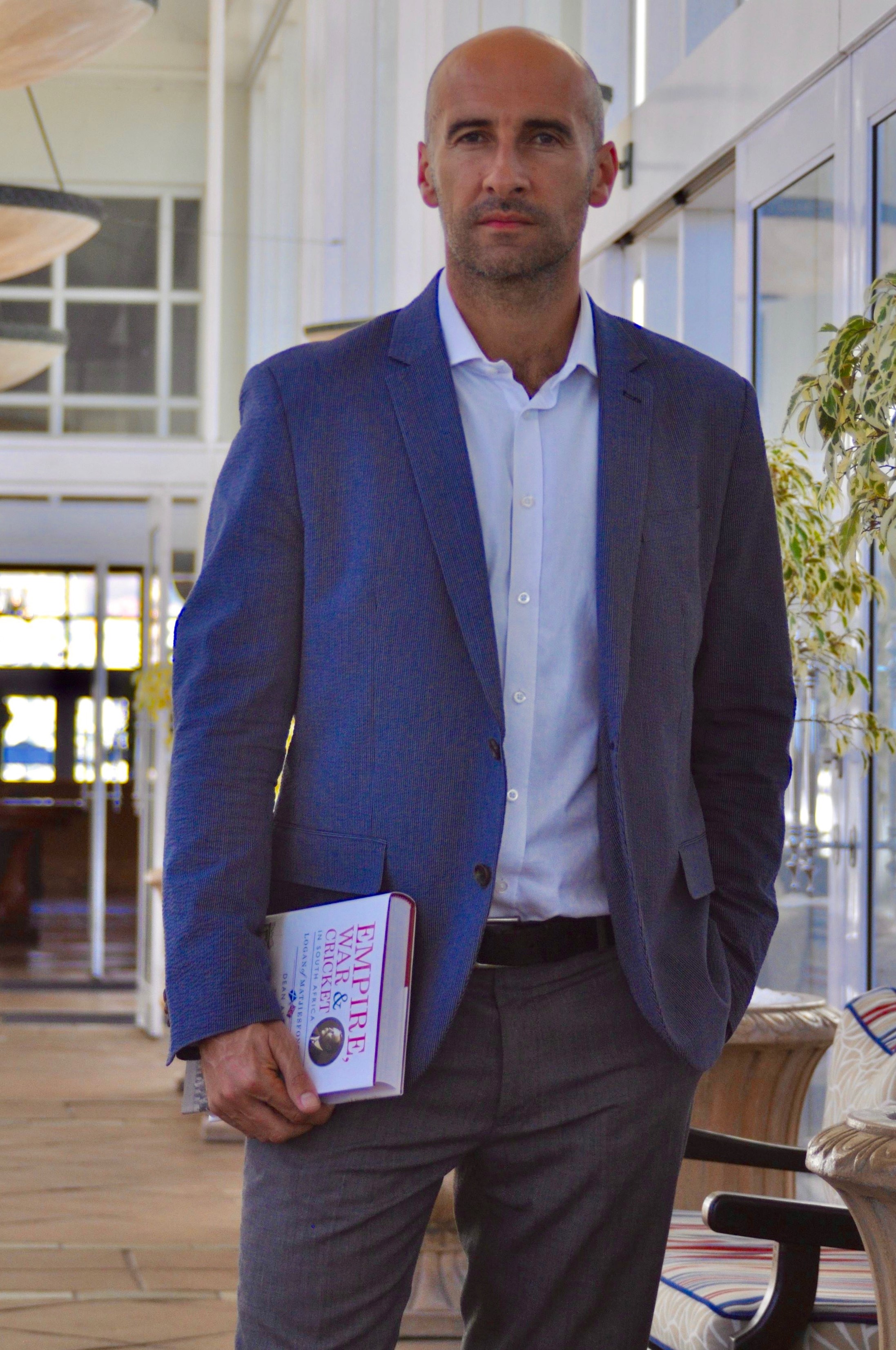 Dean, a little about yourself, please?
Hello everyone. Firstly, may I wish you all health and happiness at these uncertain times, I hope you’re doing OK.

Well, I am originally from Somerset in the West Country of England. I first arrived in South Africa in the mid-1990s when I fell in love with the country and the people. I had met a South African lady (called Van der Merwe!) in England, so she is responsible for bringing me here! Our relationship didn’t last, but my love affair with South Africa is still going strong!

After leaving school, I worked in a bank, but I knew that office work was not for me, so ‘Ms. Van der Merwe’ persuaded me to go to university (at the age of 26) to study to become a sports teacher. I have a passion for sport and teaching, so I resigned from my job and took the plunge!

I went on to study at Stellenbosch University here in South Africa, where I completed a degree, then a masters and then a PhD! In fact, I am the first person in my family to go to university, so I’m proof that it is never too late to make a positive change.

I went on to become a university lecturer in history and sociology. Over the past decade, I’ve travelled the world teaching at universities here in South Africa, Australia, Northern Ireland and England. In 2015, my book Empire, War and Cricket was published, and it has gone on to sell over 10,000 copies alone here in South Africa.

Let’s start with the talk you’re currently giving on ‘The 1918 Spanish Flu Pandemic.’
I believe that we can all learn lessons from history, especially at times like these when the world is facing a major challenge. I decided to research past pandemics to compare where we are now and how the world recovered from these incidents. The Spanish Flu pandemic of 1918-1920 killed as many as 100 million people around the globe and to date, remains the world’s worst natural disaster. The Spanish Flu infected one-quarter of the world’s population! Despite these figures, and the fact that World War 1 was happening at the time, mankind recovered from this virus as we will recover from the current pandemic.

Because people want clear and useful information, the talk has proved incredibly popular. We have even had requests to present the talk from places like Pakistan and Spain. I hope many people here in South Africa will get the chance to listen to it.

There have been comparisons between the Spanish Flu and Coronavirus…
Yes, we cover that in the talk. There are, in fact, many comparisons. For example, both are novel viruses, i.e. they are new viruses with no-known immunity or vaccines. Both diseases were spread by travel – in 1918, by soldiers returning from World War 1 and now by people travelling between countries and districts. The controls we are seeing are quite similar with face masks, disinfectants and social distancing. Both viruses were also transmitted from animals.

Without telling us too much (that’s what your talk is for) I do have one (maybe two) nagging questions.

Why would Coronavirus just go away?
Like all viruses, it loses its strength if it’s not transmitted directly from human to human hence the need for social distancing over a more extended period. As we saw with the Spanish Flu, it took several years for the virus to be eradicated. We are hoping with the current lockdown restrictions that the situation with Coronavirus can be controlled much quicker. It will, however, take time and social discipline for this to be achieved. Again, it’s a case of learning from history.

Do we know why Sars and The Spanish Flu disappeared, surely we can’t attribute this to herd immunity?
There is much debate amongst scientists why the viruses first appeared and then eventually died out. The majority of the deaths from the Spanish Flu were in the age bracket 18-45 years which, of course, differs from the current situation where the elderly have been worse affected. There is evidence to suggest that the elderly population did, in fact, build up a form of immunity having survived the Russian Flu of 1889-1890 (which killed 1 million worldwide). So there may be some truth for us in modern society that we need to build our immunity to this virus before it disappears. The virus connected to SARS (Severe Acute Respiratory Syndrome) which was prevalent in 2003, was a type of Coronavirus but killed only 774 people (on record) so it didn’t have the global impact that we are experiencing with the current strain of the virus. As such, SARS was controlled because there were far fewer cases.

I just signed up for your ‘this week in history’ mailers. I love everything history, give us a few gems for this week?
Rudyard Kipling once said that “we would all remember history if it was told in the forms of stories.” That’s exactly what I aim to do each week by sending out an entertaining newsletter containing stories and events that have occurred during ‘This Week in History’. For example, did you know that during this week in history in 1887, the first-ever motor car race took place near Paris, France?! You’ve all heard of the Chernobyl nuclear disaster I’m sure? Well, that took place during this week on 26 April 1986. Finally, and it’s linked to our discussion here, the virus that causes AIDS was discovered during this week in history in 1984. To put things into perspective, did you know that the Spanish Flu killed more people in its first 25 weeks than HIV/AIDS in 25 years?! You can sign up for my newsletter for free here.

Tell us about your book ‘Empire, War & Cricket in South Africa’.
I am so proud of this book and the impact it’s had on so many lives. I promise it’s not a boring history book! Have you heard of Downton Abbey? Well if you like a good story with strong characters plus entertaining history, then this book is for you – a bit like Downton Abbey! It’s based on the story of Matjiesfontein and its founder – James Logan.

Young Logan was a Scotsman who arrived in South Africa in 1877 penniless, at the age of just 19. Within five years he became a millionaire and had built Matjiesfontein – a perfect Victorian town in the middle of nowhere. He even lived in the first house to have electricity in South Africa! Through doing diamond deals with people like Cecil Rhodes, Logan’s influence was everywhere. He was even responsible for bringing international sport (cricket especially) to this country. It’s a tale of dodgy deals, politics and intrigue – a bit like today in fact! It has become a best-seller here in South Africa. I’d be happy to organise signed copies for any of your readers.

Your online course on how sport shaped the world…
Yes, with all my years’ experience of teaching at leading universities around the world, I thought it would be a good idea to launch my own online history courses. Especially now, with online study being so important. The first course is entitled ‘How Sport Shaped the World’.

I promise you that you don’t have to be a sport’s fan to enjoy this! Over a series of fully narrated lectures, I’ll explain how events in history shaped the sport we play today. Have you ever wondered, for example, why we are so crazy about rugby in South Africa or why Indians play cricket? All these questions and more are answered on this course as I take you on an entertaining and educational journey back through time. You’ll learn so much more about how we live today!

You are also a motivational speaker…
I enjoy teaching, and I enjoy people, so I guess I was born to be a speaker! I decided last year to take a leap of faith, and I resigned from my job as a Senior Lecturer at Bournemouth University in the UK to become a professional speaker here in South Africa. I’m passionate about speaking and communicating stories. I also enjoy connecting with my audiences. Some people have described me as one of the best speakers in this country, so that’s praise indeed. I hope your readers will follow me and my events via social media and my website.

What’s the future looking like for you?
I know it’s a cliché, but I believe the future is bright! For us all, I hope. I think this current crisis has given many of us time to think and reflect on what is actually important in life. I also believe that lockdown has given this beautiful planet of ours time to recover from us humans. Through my writing and speaking work, I aim to continue sharing information to give people hope and direction. South Africa is definitely the place for me. I’ve found my ‘tribe’, and I am happy to be here.